Pau Lopez’s future has been one of the most covered transfer rumours in the Spanish media over the past 6 months or so. Spending last season on loan at Tottenham Hotspur, expectation was for the temporary move to be made permanent, with the backing of Mauricio Pochettino.

Tottenham had a buying clause of €7m but didn’t intend to use that, something which Espanyol perhaps didn’t see coming. With Pau’s contract running out in June 2018, Tottenham expected a discount.

Whilst those Spurs wishes were fair, some of their reported offers (around €2m) certainly weren’t and Espanyol decided to keep Pau. He’s been first choice goalkeeper this season, thanks to a Diego Lopez injury, and if Espanyol can get a renewal, there’s every chance he’ll be first choice long term, the youngster’s performances so far would justify it.

Now Espanyol work on that renewal, but not without competition from elsewhere. Whilst a Tottenham swoop and pressure for a free transfer can’t be ruled out, given their efforts already this year, there’s also pressure from Brighton & Hove Albion and Watford. 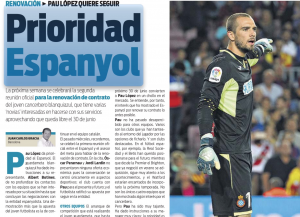 Catalan newspaper Sport report that Brighton made a move for the goalkeeper during the summer transfer window, but didn’t manage to get anywhere, and their interest has now been joined by Watford.

For either Brighton or Watford to have any chance of success they’d surely have to convince Pau he’d have a good fight to be first choice, otherwise there’s not a great deal of point in moving.

Going to Tottenham with the idea of being Hugo Lloris’ long term successor, after Diego Lopez had taken his Espanyol place, was attractive. But now with Pau, 22 years of age, picking up more first team experience, it’ll be more difficult to accept a non playing role.

Given the contract situation, and Pau’s rising star, getting a renewal is now a ‘priority’ for Espanyol, say Sport.