Tottenham Hotspur were reportedly one of the clubs who watched João Félix’s fantastic display for Benfica last night.

As reported by newspaper Record, Spurs were one of the clubs who had officials watching the Eagles’ Europa League clash against Eintracht Frankfurt.

The Lisbon side won the match 4-2, getting a good advantage for the second leg of the Europa League’s quarter finals.

Record writes that several ‘European sharks’ have been at the Estádio da Luz to see the 19-year-old ‘genius’, and the Spurs were one of them. 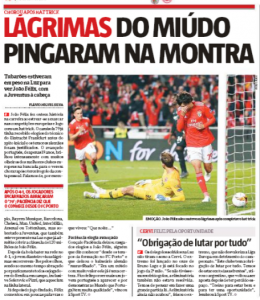 João Félix has scored a hat-trick in the win, being Benfica’s youngster player to do that in European competition, and was clearly the man of the match.

The youngster is protected by a €120m release clause, and considering the number of clubs who are after him, it’s very likely that the Eagles will get something approaching that amount when they sell him.

This is the first time Tottenham have really been pushed forward for the player.

Of course, €120m isn’t a Spurs transfer fee, but it may be possible to build a deal including bonuses and a sell-on which could tempt Benfica.

It’s a long shot, and would be game-changing in terms of Tottenham beating other to such a potentially expensive signing.

To underline how loved this footballer is becoming in Portugal, here’s a selection of today’s headlines:

Headline: My name is Félix and I’m a genius

Headline: The Eagle flew high on the wings of João Félix