With Moussa Sissoko spending a lot of his time at Tottenham on the bench this season following his £30m transfer from Newcastle in the summer, rumours of an exit could be well founded.

Spotted having an in-depth chat with Marseille ambassador Basile Boli a few weeks ago, stories regarding a return to France at the Ligue 1 club started doing the rounds. 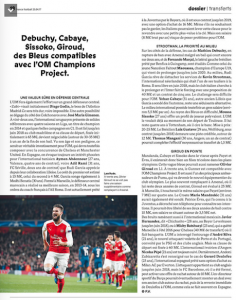 The French side are keen to rebuild a competitive squad after a few years of mediocrity, and with their new backers, could make a big splash in the summer transfer market.

France Football look at some of their potential target in their weekly magazine, and the Spurs midfielder, unsurprisingly, makes an appearance.

Adding to the fact Marseille have always been great admirers of what Moussa Sissoko can bring to a team with his drive and versatility, wanting him when he was at Toulouse, his current situation at White Hart Lane could facilitate a move.

However, it won’t be cheap, with Tottenham most likely keen to recoup as much as possible on a player who can only be branded a flop as things stand, and France Football reckon €20-25m should do the trick to convince them to wave him goodbye.

It’s certainly one that’s picking up some pace in France, and definitely one we’ll be keeping an eye on in the coming weeks.