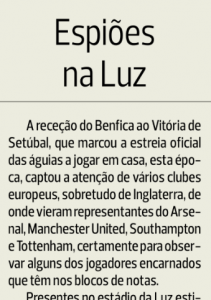 Ever since Mauricio Pochettino left Southampton to take over at Tottenham Hotspur, the clubs have gone down similar transfer paths. Pochettino didn’t leave alone, and some of Southampton’s recruitment and scouting network also made the trip to London.

Southampton’s France scout moved to Spurs, which led to the situation of the club’s new scout rubbing shoulders with the old one as they both kept an eye on the same talents.

It’s often the case that when Southampton are scouting a club, Tottenham will have someone there too. It could be a coincidence or something left from a legacy of the same people building similar systems at both clubs.

On Sunday, the Premier League pair had officials at Benfica’s draw with Setubal. It’s been confirmed by the official list of club officials published by Portuguese newspaper A Bola today.

The same newspaper says nobody really stood out, so it may have been a wasted trip, at least they had each other for company.