From what we can gather, being a director of football at a big club is a great honour, a job many fans would dream of having, thinking they know what’s best for their football club.

However, there is one downside to it, and it’s the inability of going to watch a game in person without transfer rumours popping up left, right and centre.

With rumours of Antonio Conte potentially taking over from Luciano Spalletti, the director of football’s travels were taken as him potentially scouting some players ahead of some summer moves, and among those listed by Gazzetta dello Sport was Christian Eriksen.

Now, before you scoff too hard (you can maybe scoff a little bit), it’s worth pointing out that Inter are third in Serie A and will likely get Champions League football next season.

Furthermore, they would represent an interesting challenge for the Denmark international, who doesn’t appear to be all that interested in quickly renewing at Tottenham. 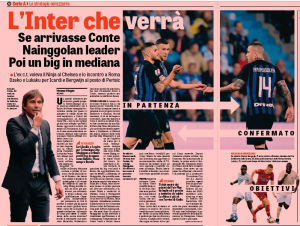 He also only has one year left on his current deal, which limits, to a certain extent, the amount Daniel Levy can ask for without sounding over the top unreasonable.

Of course, it’s Daniel Levy and we all know what he’s capable of, but he could end up having to decide between keeping an unhappy Eriksen around until he leaves on a free, or sell him for a reasonable price in the summer if he wants to leave.

Inter would have to come up with some money, and they will have some especially if they sell Mauro Icardi and end up signing Edin Dzeko for far less.

It’s worth pointing out we’ve seen this time and time again from the Italian press, linking clubs like Inter with players such as Luka Modric and Ivan Rakitic with nothing ever happening, so, Tottenham fans, we wouldn’t worry too much.

There doesn’t appear to be anything concrete in this just yet, so if you see something about it in the English press that’s over the top ridiculous (like Milan offering Mauro Pochettino €300m to spend on transfers), you’ll know where it’s come from and that, for now, it’s just a vague rumour.