While, as fans, we tend to gush over individual skills and performances, it’s easy to forget the importance of the rest of the squad around the player to help them reach that level.

Most great teams of their era will have a standout performer, like Cristiano Ronaldo at Real Madrid during their Champions League bingo series, or Lionel Messi under Pep Guardiola, but they never would have won all those trophies without the other players around around them.

It was the same for France’s World Cup win in 2018, captained by Tottenham’s Hugo Lloris, which was above all a team effort, with players like Olivier Giroud sacrificing their normal objectives to ensure their country came away with a win, and eventually the trophy.

In a chat with L’Equipe alongside Guilhem Guirado, the captain of France’s rugby national team, the goalkeeper was asked whether his sport relied more often on individuals compared to rugby’s idea of team unity.

He replied: “There’s limits to it. When Barcelona were on top of the world, everyone referenced Messi, but the collective around him was monstrous. Today, Messi is at the same level, but those around him aren’t as good, and it shows in the results. You need to rely on the individuals… (Guirado cuts in with: “But we need all the others”) …Exactly!” 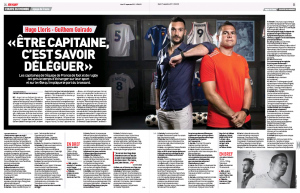 And that seems to be the idea Mauricio Pochettino has tried to instil at Tottenham since taking over, relying more and more on the team than on individual prowess.

The likes of Harry Kane, Son Heung-min and Christian Eriksen can still turn the game on its head with a moment of magic, but that’s not what the Argentine wants to rely on, and it seems his goalkeeper agrees.