The 31-year-old was a vital member of Los Blancos’ squad that won four Champions League trophies during his period in the Spanish capital.

Zinedine Zidane stopped counting on the Welshman in the second half of last season, which is why the La Liga winners agreed to loan him to Spurs.

Bale’s second spell with the north London club is nowhere close to his first one.

Multiple injuries have not made it easy for the attacker, while José Mourinho has not handed him regular opportunities in the Premier League. Bale has been restricted to only six league appearances, which includes only two starts.

This week’s edition of SportBild carries a Pierre-Emile Højbjerg interview, and he was diplomatic when asked about Bale’s struggles at Tottenham.

“We all know what qualities Gareth brings to the table. Therefore, it is up to us as a team to assess these correctly. He has a great history at Tottenham and we all want another successful chapter to follow,” the Dane said. 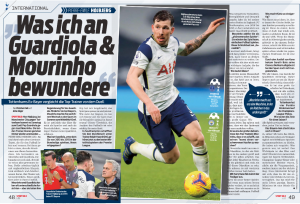 Bale could start for Tottenham in the FA Cup clash against Everton on Wednesday. The cup tie will be an opportunity for the forward to convince Mourinho to hand him more opportunities in the league.