When Tottenham Hotspur scouted Porto FC in the first league game of the season, it just sounded obvious that they could be watching Ricardo Pereira, who they’ve been linked to during the past couple of months.

Tottenham aren’t a club who frequently have scouts in Portugal, and that’s why it’s very interesting to see them in the list of scouts once again, this time for Porto’s away match against Tondela.

A Bola reports that Spurs officials were at the small city this Sunday, and it’s becoming quite clear they have an important target to keep an eye on, although the newspaper doesn’t say if it’s Pereira or not.

Porto keep showing they’re well prepared for the season, and got their second league win, with a goal scored by Vincent Aboubakar.

We’re not sure of how often fullbacks are given a Man of the Match award, but that’s what Ricardo Pereira got yesterday. A Bola praises the player for being an ‘example of attitude’ as he does everything the manager needs, no matter if it’s defending or attacking. He showed presence on the entire right hand side and showed quality ‘constructing and destructing’. 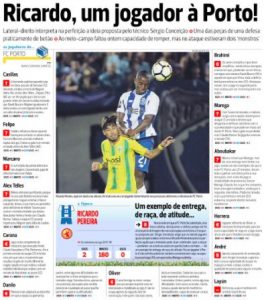 On loan at French side Nice for the past two seasons, Ricardo Pereira was kind of forgotten by Porto until he returned to the club this summer. His quality has been impressing the coaching staff, and that’s why he got a starting sport straight away. He has a €25m release clause, so the Dragons are concerned he could still be leaving this summer.