At the time the Italian media first reported Tottenham Hotspur’s interest in Hector Herrera from Porto, the Portuguese press used to credit them in their coverage of the story.

But as it always happens in Portugal, the rumours become common knowledge, and they decide to take it as the truth. That’s what A Bola does today.

In a story about the Porto midfielder today, they write that Tottenham have him on their ‘January shopping list’.

The article is about some competition from Roma. As we’ve covered earlier today, it’s been claimed that the Italian side are bidding up to €15m to get him in January. 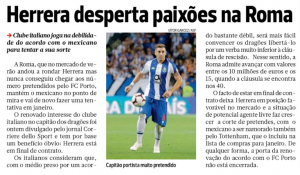 Hector Herrera’s contract with Porto is expiring at the end of the season, so it’s possible that the Dragons accept such bid so they won’t be left empty handed. But A Bola reckons that he may still sign a new deal with Porto, so the scenario is pretty unpredictable for now.

Still, Tottenham are considered to be one of the threats to take Herrera from the club. To beat both Porto and Roma in the race, the Spurs better act quickly.