Home Europe Tottenham have ‘made an offer’ for signing – Spurs pushing ahead and...
SHARE

Ousmane Dembele’s contract situation at Barcelona has been an ongoing drama for months.

The Frenchman’s current deal expires at the end of the season, and therefore he’d be available as a free agent. Manchester United have been endlessly linked for over a year, yet signing Dembele doesn’t look like a priority for Ralf Rangnick’s new club.

Newcastle United have been presented as seriously keen in recent months, with it claimed in both France and Spain that the Magpies have offered Dembele €15m a season, likely after tax, and a €15m signing-on-fee if he signs for them as a free agent.

Given the Magpies are currently at the bottom of the Premier League, it would appear their interest, whether real or not, is being used by the player’s agents to pressure Barcelona. And it’s perhaps in that context that Tottenham Hotspur claims should be viewed.

Saturday’s edition of Mundo Deportivo says Tottenham have ‘made an offer’ to sign Dembele, with that offer being to his agents and the plan being a free transfer. Juventus were linked when Fabio Paratici was in charge of transfers in Turin, so some interest wouldn’t be a huge shock.

Mundo say Paratici ‘wants to give Antonio Conte quality players at zero cost’, which is again something which has the Juventus plan of recent years written all over it. 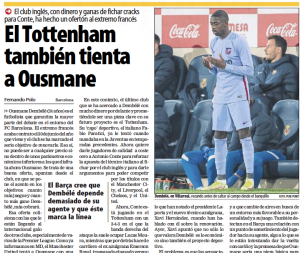 The Catalan media have made it clear repeatedly that Dembele’s priority is to stay at Barcelona, however, his agent wants more money. A renewal offer has been rejected and there’s an expected to be a meeting in the coming days to discuss a new offer.

Tottenham will likely get a mention.