In the summer, when many thought Harry Kane would leave Tottenham, the London club started putting feelers out for a possible replacement.

Dusan Vlahovic was targeted, but the Serbian remained put until January when he switched to Juventus, as was Lautaro Martinez.

The Inter star was reportedly the subject of a €95m offer from Tottenham, with Fabio Paratici putting forward €85m + €10m in bonuses for the Argentine, which was ultimately rejected.

This came around the same time Romelu Lukaku returned to Chelsea in a big move, and the idea of the Serie A side losing both their star strikers wouldn’t have sat well with the fanbase.

Corriere dello Sport look at what the future holds for Martinez going forward on Wednesday, and look back at what happened last summer.

It’s pointed out that Tottenham ‘made their offer too late’ after Inter had ‘given up Lukaku’, and selling the forward ‘would have meant dismantling the Scudetto winning team’. 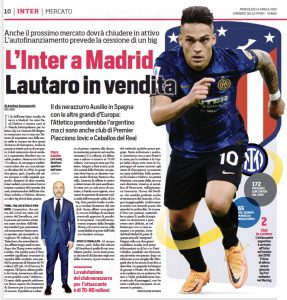 With all that in the past, eyes turn to the future, and the question of whether Tottenham, ‘now led by Conte’, will ‘return to the office in a few months’ is asked.

The answer, for now, is ‘we’ll see’, but there’s also Atlético Madrid to keep an eye on, who could be in the market for a new goalscorer in the upcoming market.

As for the price, ‘it has dropped and is now around €70-80m’, which could be great news for Tottenham.