Tottenham have given ‘serious thought’ to signing AC Milan’s Krzysztof Piątek and ‘might come back’ for him before deadline day.

That’s according to Corriere Dello Sport, who report that the striker would be allowed to leave the Italian club this month.

Tottenham are known to be on the hunt for a striker having lost Harry Kane to a hamstring injury until April at the earliest.

Piątek is one of the names they have been linked with all month, although reports suggested they were unwilling to match AC Milan’s asking price for the forward.

Their interest appeared to have cooled, with them instead turning their attention to Real Sociedad’s Willian José.

However, Corriere say that they ‘might come back’ for him at some point before the window closes.

They assume that Milan will be able to find a suitor that ‘doesn’t make Milan’s balance sheet cry’ although whether Tottenham would be such a club is debatable. 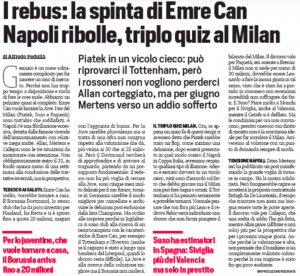 Daniel Levy is not the kind of man to pay up without asking, as has been proven on many an occasion, and he would drive a hard bargain for Piątek if they did come back.

In truth, though, that seems unlikely to happen, and this feels more like Corriere hoping that it will for Milan’s sake more than anything else.