Wolverhampton Wanderers remain keen on Nélson Oliveira but are yet to match AEK Athens asking price.

Back on the 20th of this month, we covered a report from Greek Radio Sport that claimed Wolves were looking at the Portuguese striker, who joined from Norwich City in the summer.

That report stated that the player had a €7m release clause and that was the price that Wolves might have to pay to get a deal done.

Well, according to O Jogo, the price is €6m, but the Premier League side are yet to match it. 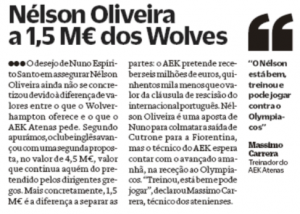 According to the newspaper, Wolves have made two proposals for Oliveira, with the second worth €4.5m.

That was rejected by AEK, though, as they are looking for €6m.

Wolves have targeted the striker as a replacement for Patrick Cutrone, who they’ve allowed to go back to Italy, but until they increase their bid by €1.5m, that isn’t going to happen.