Tottenham’s move for Willian José is no closer to being finalised with Spurs still far away from Real Sociedad’s asking price for the striker.

Spurs have identified the Brazilian as the ideal man to replace Harry Kane, who is out injured with a hamstring injury, and made a €15m bid for him earlier this week.

That was swiftly rejected by La Real, who are not keen to lose their star striker in the middle of the season.

However, Willian José’s refusal to play in midweek somewhat forced their hand, with the Spanish side now positioning itself to approve a deal they find acceptable.

Tottenham are yet to offer such a deal, though, and Diario Vasco report that the move is not likely to be ‘imminent’ unless there is a ‘radical turn of events’.

The newspaper explains that at the moment, none of the parties have moved to clarify the situation, which is the same as it was two days ago.

Tottenham’s original offer has been deemed ‘insufficient’ to satisfy everyone, and that is why there is a hold-up.

Spurs have been in contact with José and made him a ‘dizzying’ offer that would double his salary, and the player is keen on the move, putting Tottenham in a position of strength, hence their €15m bid.

However, as Sociedad only own 70% of the player that would see them receive only €10m, a figure that is seen as ‘insulting’.

The Spanish side have made it clear to the player that they will not ‘open the door’ at such a price but would be ‘open’ to hearing higher proposals.

The initial bid does not satisfy his former club Maldonado either, who own 30% of his rights, but there has been contact between them and Real Sociedad to ‘clarify positions’. 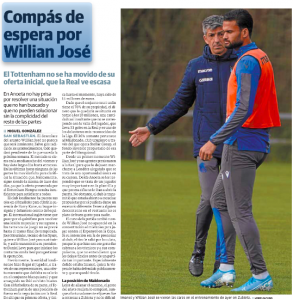 Diario Vasco believe that, as José is valued at around €30m, it would be ‘logical’ for the Basque club to receive around €18-20m depending on the player’s share.

To get to that point, Tottenham will either have to double their offer or Maldonado, the agents and the player give up parts of their ‘slice of the pie’.

Until that happens, there is a period of ‘relative calm’ in Anoeta, as they are not the ones who have caused the situation so they don’t think they should help resolve it either.