Although the race for the Sporting star Bruno Fernandes had been fronted by Manchester City and Manchester United for the past couple of months, things have been changing a little.

The Premier League champions have reportedly withdrawn themselves from this battle, and according to the Portuguese media, a couple of other English sides were now added to the list.

Newspaper Record brings a story today saying it’s now Manchester United, Liverpool and Tottenham Hotspur who are fighting for the signing of the 24-year-old.

Bruno Fernandes’ agent Miguel Pinho is set to fly to London this weekend. That’s where he will meet some of his partners who work with Premier League clubs. 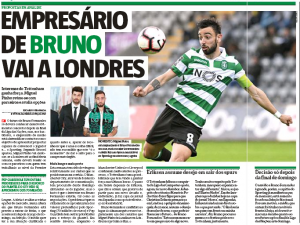 Bruno Fernandes is going on vacation next week, since he still has the Nations League final to be played on Sunday. The player reportedly wants to sort his future as soon as possible, as he believes it’s time to move to the Premier League.

Record writes that Man United and Liverpool continue to be ‘very attentive’ to the process, while Tottenham have been ‘gaining strength in the past few hours’. For Spurs to really go for the player, they will need to sell Christian Eriksen, who’s now expected to leave London after his recent quotes.

Since Spurs are ‘one of the scenarios evaluated’ by Miguel Pinho in the next few days, perhaps they’re already sure that the Dane international is leaving them this summer.