Tanguy Ndombele has been one of the standout players for Lyon this season and his displays for the Ligue 1 outfit have seen him attract interest from Paris Saint-Germain and clubs across Europe.

This is according to today’s edition of L’Equipe, who say one of the foreign clubs chasing the midfielder is Tottenham Hotspur.

It’s claimed that Spurs are ‘convinced’ by the France international’s profile.

The north London club’s manager Mauricio Pochettino has also give his backing for the transfer after validating the player’s profile.

In addition to this, the English side are also making a good offer to the Lyon star, which would presumably on wages. 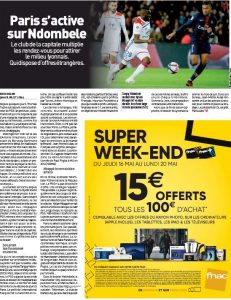 Last summer, Levy ‘verbally expressed’ his side were willing to pay €45m for Ndombele, but the figure was deemed too low by his employer.

It’s clear that Tottenham will have to offer an even higher fee, if they are to have any hope of securing Ndombele’s services in the summer transfer window.