In March, we covered claims from France that both Tottenham and Arsenal were interested in Tanguy Ndombele.

In May that was followed up with L’Equipe saying the Lyon midfielder ‘aroused the interest’ of Tottenham and PSG.

Last month, the same French newspaper reported Spurs ‘could be tempted’ to try and get a deal done before the close of the window.

On Sunday, L’Equipe has some claims about the efforts Tottenham made to sign the 21 year old, a player Lyon have been very keen to keep hold of after securing his permanent signing from Amiens.

L’Equipe claim, ‘at the beginning of the summer’, Daniel Levy ‘verbally expressed’ his 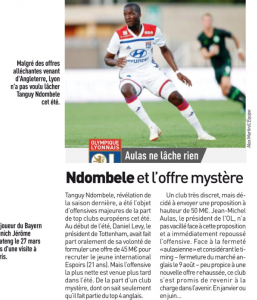 club’s willingness to pay €45m for the player, but that wasn’t an offer high enough to please Lyon.

After that a ‘mystery’ club put forward a €50m offer, which still wasn’t enough for Jean-Michel Aulas.

All that’s revealed about the mystery club is that they’re a top four Premier League side and have promised to return in January or June.