Jordi Alba’s contract at Barcelona runs out in 2020 and despite several promises made to him over the years, he has not been handed a new deal.

A ‘Top Secret’ report from Mundo Deportivo looks at the situation, and today’s edition of the Catalan newspaper claims Barca want to offer a new deal.

It’s claimed the intention of the La Liga winners is clear and they are looking to negotiate before the end of this year and hopefully tie down the defender to a new deal in the second half of this season.

However, the left-back’s agent is yet to receive a call and the situation has led to ‘concern’ and ‘disappointment’ within the player’s camp and the above mentioned plans have not been explained to the 29-year-old or his representative.

Alba has been a vital member of the squad but so far the former Valencia man is still waiting for the call from his employer.

A member of the technical secretary’s team has already called the defender’s agent, but the key leaders involved in the negotiations have not yet approached the player’s environment, which has ‘surprised’ them.

Mundo claims there is a curiosity amongst Alba’s surroundings to see what terms will be offered as Barcelona are aware the people associated with the player are becoming ‘impatient’ due to the current situation. 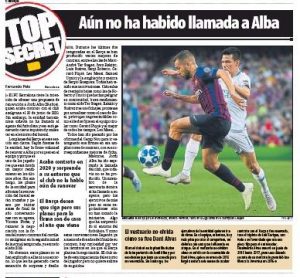 Considering several stars have already been handed improved deals over the past two years, it’s no surprise that Alba and his agent are disappointed with the lack of urgency in handing the Spaniard a contract.