Argentina were knocked out in the round of 16 at the 2018 World Cup and their poor performance at the FIFA tournament in Russia saw La Albiceleste part ways with coach Jorge Sampaoli.

Since his exit as the national team manager, the 58-year-old hasn’t given any interviews until he spoke to Spanish newspaper Marca, and that’s been published on Tuesday.

In it, he reveals his interest in Leeds United.

The former Sevilla boss admitted that he needs time off to analyse and make things clear before taking a decision on his future.

He has a lot of free time on his hands and hasn’t stopped watching football matches from across the world, but he expresses his concerns over a lack of ‘pure football’.

Marca asked the South American about clubs that draw his attention, and this is when Sampaoli explains why he doesn’t miss Leeds United, managed by his compatriot Marcelo Bielsa, matches.

“I like Sarri’s Chelsea, [Manchester] City of Guardiola, Barça and Madrid always … and Quique Setién’ Betis are also interesting,” he said. 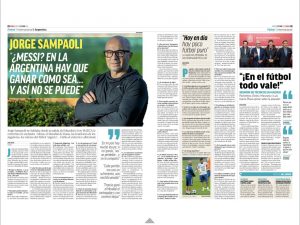 “I see the La Liga a lot, also for Sevilla. I give more priority to the La Liga than to others, but I try not to miss the Premier League, the French league, the German league or the Serie A. Mexico has attractive things, including Turkish football.

“And, of course, the Leeds of Bielsa.”