Lazio have apparently just announced the signing of West Ham midfielder Felipe Anderson in a quite unusual way.

The Serie A side have just released a statement on their official agency app which confirms that the 28-year-old is heading back to the club.

“Felipe Anderson and Lazio find themselves after three seasons lived apart. When the roads parted, the club and the Brazilian continued towards their respective ambitions: those of Lazio to chase the Champions League, after the failed appointment on the evening of 20 May 2018, in the presence of Inter,” they say.

“From tomorrow his next country will return to having the colours of the sky, the sky of a city that smiles more than London and that wants to bring back the smile in football signed by Felipe Anderson.” 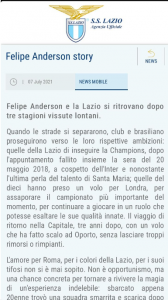 Several Italian outlets have been claiming that Lazio are spending very little in the signing of the Brazilian.

They’re expected to pay €3m, leaving 50% of a future fee to West Ham, which is definitely a lot less than the €38m they received when selling him to the London side back in the summer of 2018.

Felipe Anderson made 73 appearances for the Hammers, with 12 goals and 13 assists, but, last summer, the player was told he wasn’t in David Moyes’ plans for the club, and ended up being sent to Porto on a loan spell.

He had a quite the unimpressive season in Portugal, and that’s probably the main reason why the Premier League side couldn’t get a better deal for his sale now.