AC Milan were on Wednesday sanctioned for FFP failings, receiving a two year European football ban and a fine of €30m.

The Serie A club plan to appeal against the decision, taking it to the Court of Arbitration for Sport, but there’s no guarantee that route will provide any joy and there’s now a panic situation at the club.

Sales were expected anyway, and now even more, so, with Il Messaggero on Thursday going with a headline saying ‘At Milanello it’s time to pack your bags’.

Milanello is Milan’s excellent training centre, maybe they should start opening it for short breaks.

Anyway, one of the players thought to be most likely to leave is Andre Silva, and the Italian newspaper say Jorge Mendes will have to find him a new home. 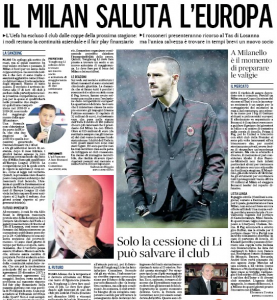 Il Messaggero state the striker will be ‘placed’ by Mendes at a club close to the agent, with Wolves and AS Monaco the options name.

Wolves have been repeatedly linked to Silva, often without much reason and the recent signing of Raul Jimenez surely makes the Portuguese international’s arrival less likely.

Mendes will have to work some magic.