While his last spell as a manager (at Manchester United) didn’t end on the high note he would have wanted, Louis van Gaal will always be remembered as the manager who won the Champions League with Ajax for the first time since the Cruyff team of the 1970s.

Now retired, the Dutchman splits his time between Holland and Portugal, giving interviews here and there.

Sitting down with Sport/Foot this week, Van Gaal mostly talked about Barcelona, a club where he handed Pep Guardiola the armband after just six weeks in charge, noticing that the now Manchester City boss was already a managerial diamond in the rough as a player.

He said: “I made him captain because of his attitude in training and following talks with other players. I liked Pep because all he talked about was football, and tactics!

“At training, for example, he came to tell me: ‘Mister, mister, Figo and Stoichkov need to stick to the sidelines so I can distribute the ball with my eyes closed’. He shouted all the time. Now that he’s a manager, he does the same. He lives the game.”

For the former Manchester United manager, becoming champion while playing offensive football is, as he puts it, ‘the greatest satisfaction in the world’.

Seeing this as the ‘hardest’ way of winning, the Dutchman feels managers are turning to ‘easier’ more defensive tactics these days, leaving the true artists to fend for themselves. 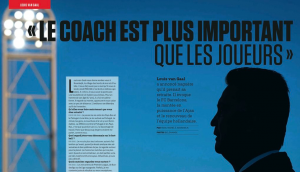 He said: “There’s only one left: Pep Guardiola. Ernesto Valverde tries, but not like Guardiola. Same for Jürgen Klopp. But it means nothing because Manchester City haven’t won the Champions League yet.”

That could easily change this season, however, but we’ll have to wait and see for that one.

He pushed home the point again when asked about the status of attacking tactics in football right now: “FC Barcelona, ​​Ajax, Manchester City… All these clubs play offensively. Liverpool less. The Dutch national team too.”