In the months leading up to the January transfer window, Denis Suarez was repeatedly linked with a move to the Premier League, with the Catalan media pushing stories about the Barcelona player.

The clubs most linked were Chelsea and Arsenal and it was explained over and over again that Suarez would like a move to the Gunners, feeling his style would fit with that of Unai Emery.

Despite claims of Arsenal potentially making an offer, the eagerness seemed to more on the side of the player, or at least that’s how the Catalan media made it sound.

Now, Sport reports there’s been an offer for the Barcelona squad man… but it’s not from either of the clubs mentioned.

In their Saturday edition, Sport state ‘There’s an offer from West Ham’ although they don’t say how much that offer is worth. 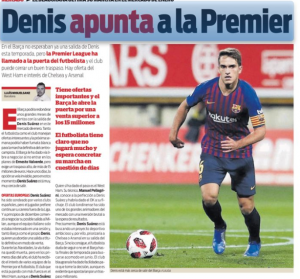 Manuel Pellegrini is said to have given his ok to the January signing, and that’s what pushed West Ham into action.

From Suarez’s perspective, it doesn’t sound hugely welcome, with Sport saying he’d prefer Chelsea or Arsenal, and could even wait until the summer for a move.