Home Europe Newcastle United offer ‘on the desk’, a ‘not insignificant’ amount for January...
SHARE

Newcastle United have made an offer for Faitout Maouassa, report L’Equipe in their Saturday edition.

The 20 year old is a left sided player who usually operates at left back, but can also play further forward. He’s owned by Stade Rennais, where he has a contract until June 2021, but has been spending this season on loan at Nimes.

According to the French newspaper, Stade Rennais president Olivier Letang has ‘for several news’ had an offer ‘on the desk’ from Newcastle.

The offer is described as ‘not insignificant’ and being greater than €8m. To try and swing things in their favour, the Premier League club have proposed they pay the amount in one go, rather than through staggered payments.

For now, it’s not enough for Letang, who feels the player can progress further and therefore be worth more in the future. 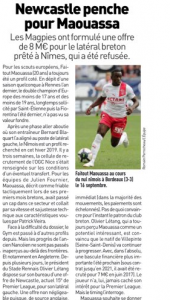 As for Maouassa himself, it’s explained he’s never hidden his interest in a move to England’s top flight but isn’t in a rush and wants to concentrate on making France’s U21 squad for the upcoming summer tournament.