Home Europe “That’s why I chose him” – Radrizzani on Bielsa decision, reveals he...
SHARE

Speaking to Forbes Italia just on Tuesday, Andrea Radrizzani is doing a tour of financial newspapers in his home country this week, as he also had a chat with Il Sole 24 Ore.

The Leeds United owner has been the driving force behind the club’s resurgence over the past few years, hiring Marcelo Bielsa to steer the club back towards the Premier League for the first time in 16 years, which they achieved last season by winning the Championship.

Now back in England’s elite, the Elland Road side have enjoyed a strong start to the campaign, most recently thrashing Aston Villa 3-0 away from home.

Radrizzani, in his chat with the newspaper, explained a bit of the backstory behind his decision to hire Bielsa for his, at the time, newly purchased club.

He said: “When I hired Marcelo, I spoke with him for 10 hours in Buenos Aires, but the first thing he asked was to improve the Leeds Sports Centre. He told me he can develop players, but not facilities. That’s why I chose him: he’s a perfectionist and always plays attacking”.

Explaining he’s invested around £100m in Leeds so far, Radrizzani also reminded he bought back Elland Road, which they are currently renovating, and had it not been for Covid-19, the club ‘would have reached a turnover of €180-200m.

Without fans, life has been tough for clubs around the country and Europe, and some providers has recently been criticised for seemingly trying to capitalise on this, offering a pay per view system for supporters to watch their team from home at close to £15 a pop. 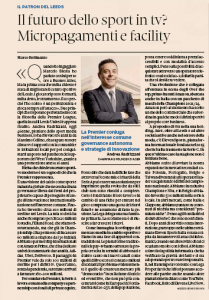 Radrizzani has been thinking about making football more affordable for those forced to watch it online, and he explained his plan.

He said: “The problem is obviously that of creating a more ‘democratic’ market in which the hunger for football and live events can be satisfied at affordable prices and with simple access methods. I’m thinking of the possibility of buying the game you want to see through a phone network operator or on social networks for $2-3”.

It’s bold, and we’ll have to see if it pays off, but it’s certainly something worth considering, such is the demand for this throughout the world, with many unable to afford the fees needed to watch their beloved teams week in, week out.