The Italian media aren’t saying a great deal about Sami Khedira moving to Everton. One would be forgiven for thinking it’d be a big story in the Italian sport media, especially given how closely Carlo Ancelotti is followed, however it’s just not catching the imagination.

That may well be because in Italy they’ve been reporting Khedira to Everton for months and have now got a little tired of the story, and it’s also not thought Juventus will be getting a fee should the player move in January.

Turin newspaper Tuttosport covers Juventus and Torino closely, and in their Sunday edition the Everton slant is on the latter Italian club. A few days ago we covered claims of Liverpool interest in Gleison Bremer, and it was pointed out Everton are also in the picture for the defender.

Those claims were also around in September, when Tuttosport reported Everton interest and said Torino would let him go. It wasn’t said how much the Serie A club would demand for the move. They spent €5.8m to sign him from Atlético Mineiro two years ago, and he’s now valued by Transfermarkt at only £5.4m. 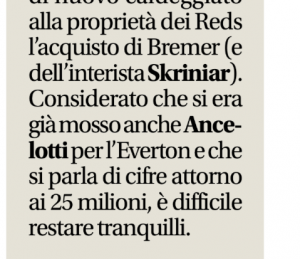 Now Tuttosport cover Liverpool interest again, and when it comes to Everton they say Ancelotti ‘has already moved’ for the player, and ‘we’re talking about figures around €25m’.

That sounds a little high, and the newspaper says at such a figure it would be ‘difficult to remain calm’.