Returning from a loan spell at Rayo Vallecano, Giannelli Imbula continues to be the headache that never goes away for Stoke City.

The 26-year-old was bought for £21.8m, but never managed to have the desired impact at the bet365 Stadium, heading out on loan to Toulouse a year and a half later.

With the Potters now in the Championship, he’s an even bigger problem to have around, meaning they’ll do pretty much anything to avoid paying his wages next season.

That’s why Bologna are keeping an eye on the situation, although he isn’t anywhere near their first choice to bolster the midfield. 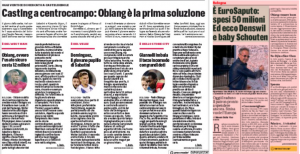 That battle is between West Ham’s Pedro Obiang and Velez Sarsfield’s Nicolas Dominguez, while Imbula is backup to both.

While Gazzetta dello Sport report Imbula ‘doesn’t convince’, Corriere dello Sport state the fact Stoke City are more than happy with a loan with a view to buy offer, and aren’t forcing for an ‘obligation to purchase’, has made Imbula a possibility.

That’s why he will remain on their board of targets until a deal for either Obiang or Dominguez is done.