Home Europe Sporting have filed a complaint with FIFA over Wolves, claiming €54m for...
SHARE

Rui Patricio and Sporting had seemed to be too good natured.

The goalkeeper rescinded his contract with Sporting after an €18m move to Wolves was ruined at the last minute, with Bruno de Carvalho and Gestifute blaming each other.

Patricio used ‘just cause’ to terminate his contract, after Sporting players were attacked at the club’s training ground, and due to the unreasonable behaivour coming from big bad Bruno.

Several players followed Patricio and have also cancelled their contracts, but the goalkeeper is the first to sign for another club.

There have been repeat reports in Portugal that Wolves are willing to pay a fee, even claims they could go as high as the €18m originally agreed. Wolves themselves have spoken about it publicly.

But now everything has taken a turn for the worse. 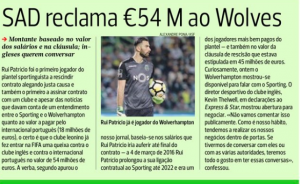 A Bola report Sporting have filed a claim with FIFA, seeking €54m from Wolves and the footballer. The amount is made up of Patricio’s €45m release clause and the remaining wages on the two years of his contract which was left.

This perhaps isn’t the best way to keep things good natured. And this time Bruno de Carvalho can’t be blamed, having been ousted from the club.