Now is the time when footballers around Europe, those who haven’t got extra time off because of the World Cup, should be getting ready to start preseason.

Many will be going on tours or training camps outside of their club’s country, and when a player doesn’t travel it’s a sure sign something isn’t quite right.

That’s the case with Jean-Michaël Seri, who is missing from Nice’s trip due to personal reasons, reports L’Equipe on Sunday.

It’s suggested those personal reasons are likely related to a transfer, and the midfielder could be leaving his Ligue 1 club soon.

Many clubs have been linked with Seri over the past year or so, but L’Equipe have narrowed 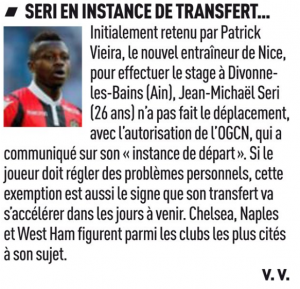 it down to three possibilities, the most linked clubs: West Ham, Chelsea or Napoli.

Chelsea and West Ham have been linked repeatedly, as well as the Italian side, and Nice will be expecting one of them to part with €40m if they want to sign the midfielder.