Portuguese newspaper Record has a big story on the Adrien Silva case today, as they interviewed several people to comment on FIFA’s decision to reject Leicester City’s appeal.

One of these people was Lúcio Miguel Correia, a professor of sporting law, who’s frequently contacted by the local press, especially when speaking about Sporting.

Correia claims that even if Leicester City try another appeal in the Court of Arbitration for Sport, things shouldn’t change much.

“From the background of other similar cases, I fear Leicester will not have a different outcome. Usually in these cases, FIFA uses the method that applies to transfers and the documentation was delivered 14 seconds late.”

“I know that the situation started before midnight but, here, the leaders of Leicester have revealed an amateurism that has become damaging, especially for the player. In addition, I do not believe that CAS will present a resolution in the 90 days remaining to reopen the market.” 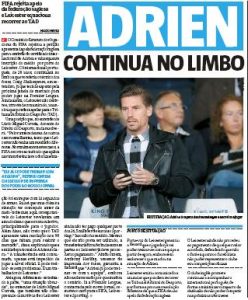 “The transfer is complete, he is only prevented from playing at the official level. And he can train without problems. He’s a Leicester worker.”

Record also mentioned the fact that Leicester City are still to pay Sporting for the transfer, and the professor had his say on it as well: “It makes no sense. Even if he can’t be used, the transfer has been closed between the parties and Leicester will now have to pay.”

Besides Correia, Record also spoke to a Leicester City press officer who confirmed that from now on, the player will be allowed to train with the squad.

The midfielder’s father has also been talking to the local press, and showed how outraged he is for the situation his son has been facing.