Southampton were reportedly one of the few clubs who had scouts in the match between Portimonense and Belenenses last weekend.

Along with Sevilla, Huesca, Valladolid and Eintracht Frankfurt, the Saints saw a 1-1 draw between two mid-table clubs who hope to get an Europa League spot for next season.

Newspaper A Bola is the one who reports the list of scouts, and although they claim that Sevilla were watching Shoya Nakajima, they don’t seem to know who the Premier League side had an eye on.

There were two players who really stood out in this match.

For the home side, the former Atletico Madrid striker Jackson Martinez had a very good performance, and opened the scores with a penalty kick. For the away side, midfielder André Santos was crucial recovering balls and creating plays. 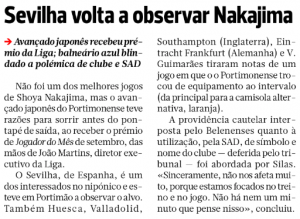 Southampton have an interest in Portuguese football, and don’t only watch the big clubs.

They’ve already scouted Portimonense at least twice this year, and the same goes for Belenenses.

In October, claims surfaced of Leicester interest in Nakajima, and several other clubs have been linked.

There’s a reasonable chance Southampton have some interest too, given their watching of Portimonense.