Paraguayan newspaper Ultima Hora claims that even though Arsenal and Tottenham Hotspur were after the player, it’s the Hammers who are landing him.

It’s said that the London side will be paying an amount of USD33m (£25.7m) to take the player from the MLS side.

Ultima Hora claims that Atalanta are closing the deal for the end of the year’s transfer window and should soon have a spot for Gonzalo Martinez from River Plate to replace Almirón. 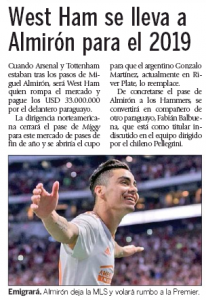 Ultima Hora seems glad that another Paraguayan international is joining the Premier League, and points out that once the transfer is confirmed, he’ll be a teammate of Fabian Balbuena, who signed for the Hammers last summer.

Almiron has an impressive record for Atlanta this season, with 12 goals and 13 assists in 32 MLS games.

Now let’s wait and see how reliable the Paraguayan media is.