Emissaries from both clubs had a job to do at the Portuguese league game, but could only watch half of it as the match was suspended at half time.

After cracks were found in the away stand, Porto fans had to be evacuated from the place, making the game impossible to be played for security reasons. The Portuguese press is today full of images of cracks inside the stadium, and it was clearly a serious situation.

The Sheffield Wednesday and West Brom officials will have likely been in the main stand, so away from danger. 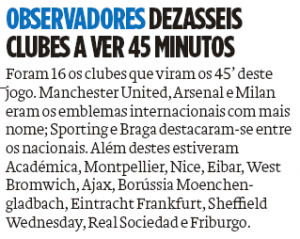 With everyone safe, there’s still room to talk about the game. Estoril were winning the match 1-0 at half time, with a goal scored by midfielder Eduardo. Goalkeeper Renan Ribeiro also got much praise for stopping all of Porto’s chances.

The away side didn’t have much to be seen. Defender Felipe, fullback Ricardo Pereira and attacker Marega were the only ones with positive ratings from newspaper O Jogo, as all the others were having a disappointing display in the first half.

Now it’s hard to tell if there was enough time for conclusions to be made by the club scouts, especially for a game where a Porto comeback was so expected in the second half.