Wanting a physical midfielder to bolster his Napoli squad, Luciano Spalletti has instructed his director of football, Cristiano Giuntoli, to find the right man.

Bordeaux’s Toma Basic appeared to be the chosen one, but Lazio have since swooped in, causing issues where none were planned.

That’s why Napoli, at the same time, have been dealing with Sheffield United’s Sander Berge, who could do with leaving from Bramall Lane following their relegation to the Championship.

The Norwegian midfielder ‘remains a goal’, according to Gazzetta dello Sport, and is now the ‘favourite’ over Basic, although he ‘will have to be evaluated from a physical point of view’ following his serious knee injury in December.

Napoli are currently ‘trying to find an agreement with the English club’, who value their star at around €15m. 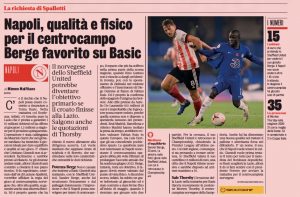 Down their end, the Serie A side consider that figure ‘excessive and would be willing to reach a maximum of €10m’.

It seems some sort of compromise might need to be made by both sides, although if Berge starts pushing for an exit, who knows what might happen?