Home Europe Second source backs up Wolves signing, Nuno looks to have got his...
SHARE

Alvaro Morata arrived in Madrid on Saturday evening, and on Sunday morning was photographed going through his medical checks to join Atletico Madrid.

The Chelsea player is moving on a loan which lasts until June 2020, which all kinds of clauses in it about possible recalls and full transfers.

Atletico needed to get rid of both Gelson Martins and Nikola Kalinic to complete the deal, but the Croatian wasn’t keen and didn’t really have a market. That led the focus to Jonny Otto and a permanent transfer to Wolves this month.

Earlier on Sunday we covered an article from AS which presented that as a done deal, even saying Wolves had used a clause… despite denials of that existing at the time the loan was agreed. 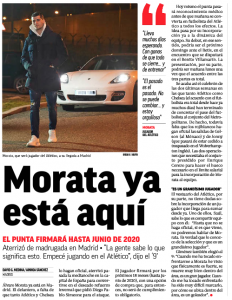 Marca back the permanent transfer up, almost presenting it as a sure thing.

Again, there’s no mention of the fee being paid by Wolves or what Jonny himself thinks about the whole situation.

Nuno Espirito Santo’s side had been linked with several fullbacks in recent weeks, looking ahead to the summer and Jonny returning to Atletico, it looks like he’s now got his man… the one who was there all along.