With Premier League clubs not making big purchases from Portuguese sides this summer, we can probably say this was an unusual off-season transfer window, even though we had several rumours.

One of the local talents who was linked with a move to England was João Palhinha. Following a great display at the Euros, the midfielder was said to be followed by several clubs, with Tottenham Hotspur thought to be the most keen.

It was many times reported Spurs wanted the 26-year-old, with claims saying the club ‘promised’ to make a bid for him, even though it was apparently never placed.

It had been said that Tottenham would like to negotiate starting from €20m, which wouldn’t be nearly enough to convince Sporting. And now, according to the latest in Portugal, the midfielder’s price is only going to go up. 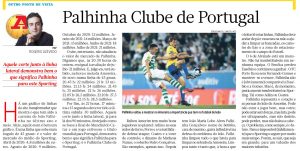 Sporting beat Estoril away 1-0 last night, and the praise we see towards João Palhinha should be a big message for the clubs who plan to get him in the future.

When showing the players’ rating, newspaper A Bola features a short paragraph on the midfielder which goes as follows.

‘It starts to be difficult to quantify the defensive and offensive actions of a midfielder who attacks (almost scored with a bomb, at 90+3′), who defends, who rules midfield, with a radius of action that increases without him having any problems with it. That, alone, disarms opponents, and almost pushes the opponent into midfield, with intensity and aggressiveness immune to fatigue. That carries the heart of the team, in every action, in every cut.’

Then journalist Rogério Azevedo features a column called ‘Palhinha Clube de Portugal. He highlights that the player’s price on Transfermarkt has been going up in the past few months, and says that during his appearance last night, it should’ve grown each 15 minutes, going from €21m at the start of the match to €30m at the end.

‘The problem, as always, is the future,’ Azevedo writes. ‘It looks impossible (unfortunately) that Sporting holds him for much longer. However, if he leaves, let it be for a big one: to a shark of the biggest sharks.’

So if Tottenham were having second thoughts about paying big for Palhinha in the summer, it looks like there’s no escape, as his price is only going up from now on.