Tottenham Hotspur’s interest in João Palhinha continues to be a rumour in the Portuguese media.

Even though it’s been a while since we last saw strong claims about Spurs’ efforts to land the midfielder, the chances of a move continue being mentioned by local newspapers.

Today it’s outlet Record who, in a short story, says Palhinha continues to be ‘pole position’ in the list of players who could leave Sporting this summer.

They say he’s currently the most ‘appetising target’ for clubs who are in the market. And Tottenham are the club who ‘promise to still bring an offer to Alvalade’. 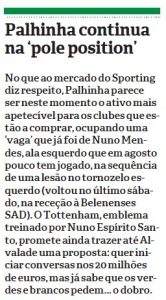 It’s said Spurs want to start talks for €20m, although they know that Sporting will demand twice as much.

That’s all Record has to say for now, and that’s pretty much what has been repeated for the past few weeks, except for the part where Spurs ‘promise’ to bring an offer. That seems to be something new, even though we’re still not that convinced that Nuno Espírito Santo’s side will indeed come strong for Palhinha this summer.

As reported by Sport Witness this morning, Sporting are still hopeful of making a sale in this transfer window, and Palhinha, along with Matheus Nunes, is identified as the club’s biggest hope of a big transfer.