Thursday’s edition of Tuttosport has Ruben Neves on the front cover, with words which will be uncomfortable for Wolves fans: ‘For Juve’

This of course isn’t the first time the midfielder has been linked with a move to the Italian club. It happened last summer and there are even rumours dating back to when the footballer was still at FC Porto.

That said, this is the biggest story we’ve seen so far, at least since the Wolves move.

Tuttosport claim there was a meeting at a hotel in Milan on Wednesday between Jorge Mendes and Juventus director of sport Fabio Paratici.

It was a catch-up, a courtesy chat which will happen more often now Cristiano Ronaldo is at the club. But, Neves came on the agenda. It’s claimed that of all the potential transfer names discussed, the Wolves player was the warmest.

In their newspaper, in claims not available online, Tuttosport state Mendes wants Neves to ‘make a leap in quality’ and a move to Juventus would do that.

The relationship between the agent and Juve grew during the summer, with the transfers 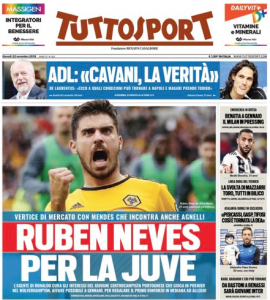 of Joao Cancelo and Ronaldo, and at the time a future move for Neves was mentioned.

Looking at it from a brighter perspective for Wolves: Tuttosport link their local club to an endless list of midfielders, and they obviously can’t sign them all. The English club would be looking for a very big fee, and and Juve may feel there’s better value elsewhere.

Tuttosport are looking at all of Mendes’ top clients for potential moves, with James Rodriguez, David De Gea and Ruben Dias also getting a mention today.