Home Europe Road gets rocky as €13m from Wolves is knocked back, offer arrived...
SHARE

There seems to be a pattern developing in Portugal over Rui Patricio’s situation.

One day it will be reported that everything is close to being resolved, and then a day or so later it’s claimed the road has got rocky and talks have broken down once again.

That’s where we stand right now, with Record reporting on Thursday that a €13m offer from Wolves has been knocked back. That offer would have been ‘clean’ and seen the Premier League club presumably then cover the debt which Sporting owe Jorge Mendes.

The super agent, who is of course very close to Wolves, is said to be owed €7m from previous deals which Sporting simply haven’t paid up.

They don’t want to do it now, either.

Record explain that Wolves had been keen to stick to the €18m originally agreed, but €7m of that would go to Mendes. They then upped the offer to see Sporting get €13m clean, but this has been rejected. 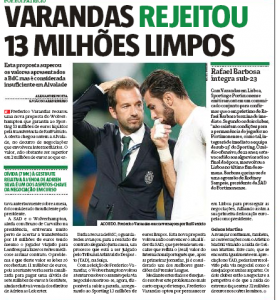 Sporting want an amount which reflects the ‘true value’ of Rui Patricio.

If this continues as it is there’s a chance the whole thing will end up at the Court of Arbitration for Sport.

At that point the obvious outcome is the €18m being agreed, and then Mendes will have to take action against Sporting, either as part of the same case or separately.