On loan at Udinese without an option to buy, Ken Sema is likely to return to Watford once the season comes to an end.

He knows it, the club knows it, and it will be up to the Pozzo family to sort things out between themselves should there be a desire for the adventure to continue from both ends for the Sweden international.

For the 26-year-old, the primary focus is to get better as a footballer, which he is doing in Italy, becoming a key member of Luca Gotti’s squad in Serie A.

Making 26 appearances in the league, which he’s topped off with two goals, the Watford man is happy where he is, away from Vicarage Road, telling Gazzetta dello Sport as much on Sunday in an interview with the newspaper.

Asked if which he would choose if he had to between Serie A and England’s top-tier, he replied: “I’m not pestered by the idea of returning to the Premier League. I know I’m on loan, but I’m only thinking about improving. I want to grow. 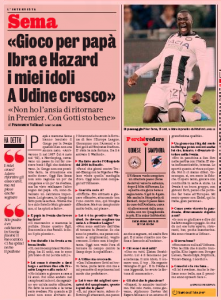 “The rest isn’t important. I can’t wait to get on the pitch against Sampdoria today after my suspension”.

Sema missed the 3-0 win over SPAL last week after picking up his fifth yellow card of the campaign against Genoa, and was set to return this weekend.

He did, but the Watford loanee was unable to help Udinese avoid a 3-1 loss to Sampdoria despite playing for the full 90 minutes.