Struggling with a number of injuries this season, N’Golo Kanté hasn’t had a chance to get the continuity he needs to truly impact Chelsea’s season as he normally does.

In and out of Frank Lampard’s team, the midfielder hasn’t played in the last two games against Crystal Palace and Sheffield United, taking his tally to 13 missed Premier League fixtures this season.

All of this has raised a few questions about his future at Stamford Bridge, although it remains to be seen how serious they are.

Those echoes, however, have made it to Gazzetta dello Sport, who didn’t miss a beat on Sunday by quickly publishing a story about Inter’s potential interest in him.

The Italian newspaper state Kanté is ‘no longer unsellable’ these days, caused in part by both the fact he’s had too many injuries and Lampard’s change of philosophy. 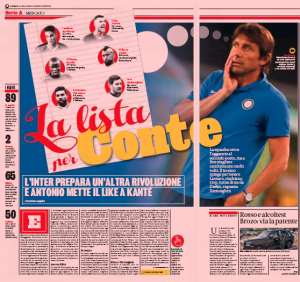 We then get the classic comment about how ‘close’ the defensive midfielder is to Antonio Conte from their time together at Stamford Bridge, meaning he is ‘a name Inter are following’ and one the manager would ‘willingly entrust’ the keys to his midfield to.

As for how Inter would afford all this, ‘it all depends on how many sales they manage to close’.

It sounds like a pipe dream for now, but we’ll know a bit more once the season ends, with a lot likely depending on how much Kanté plays between now and then.