The Belgian still hasn’t renewed his expiring contract at Napoli, and the representative explain he didn’t expect him to either, with Chelsea still in contact with the forward’s lawyers about a move in the summer.

This has now been backed up by Gazzetta dello Sport, who also give a bit more background regarding Mertens’ reluctance to sign a new deal.

It’s explained Aurelio De Laurentiis has offered his forward a €5m/year two year deal, but the player isn’t happy with ‘fines requested by the president for the mutiny on November 5th after the Champions League match against RB Salzburg’. 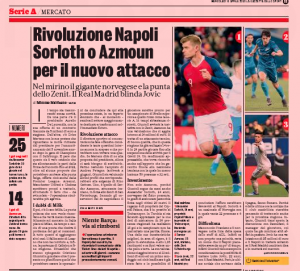 This appears to be the ‘real obstacle’ currently in the way of an extension being signed, which plays in the hand of many Premier League clubs present, with Manchester United, Arsenal and Chelsea ‘ready to deal with him’.

The fact he will be a free agent ‘makes it easier’, and with Frank Lampard clearly keen to bolster his attack at Stamford Bridge in the summer, it would be a deal hard to pass up, such has been Mertens’ goalscoring ability in Naples these past few years.