On May 29th, we covered claims from the Catalan media explaining why it is difficult for Barcelona to sign Matthijs de Ligt as Ernesto Valverde’s side have no plans to join other clubs in a bidding war for the Ajax captain.

Later that day, De Telegraaf reported Paris Saint-Germain are willing to pay €85m to the Eredivisie champions and also a hefty commission to his agent, Mino Raiola.

Apart from PSG, the latest ‘threat’ to Barcelona in signing the 19-year-old comes from Real Madrid.

Thursday’s edition of Mundo Deportivo claims Los Blancos have ‘set their sights’ on the Netherlands international, because of the possibility of losing Sergio Ramos.

The Spaniard is attracting interest from China and this has already been confirmed by Florentino Pérez. Ramos wants to leave Zinedine Zidane’s side on a free transfer, but his employer is unwilling to let him go for nothing.

With Ramos’ future at the Santiago Bernabéu uncertain, Real Madrid have turned their attention towards De Ligt. 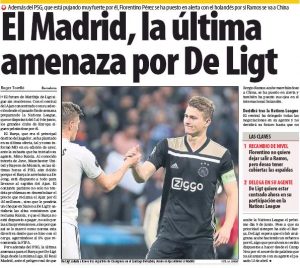 The Dutchman’s future still remains unresolved and he will only make a decision on where he will play next season after the Netherlands UEFA Nations League campaign in June.