On May 28th, we relayed news from Spain that Manchester United are still interested in Matthijs de Ligt, while Barcelona are still trying to persuade the Ajax captain that a move to the Camp Nou is the ‘best option for the future’.

Wednesday’s edition of Sport claims the 19-year-old is waiting to see how the La Liga winners’ crisis around the managerial situation will end.

Ernesto Valverde’s future remains uncertain after defeats to Liverpool in the Champions League and Valencia in the Copa del Rey final.

So far, no deal has been agreed between the Blaugrana and the Netherlands international because of the latter’s economic demands.

For Barcelona to sign the teenager, they need a ‘high economic investment’ and Valverde (if he stays) or his successor ‘would have a lot to say’ on signing the centre-back. 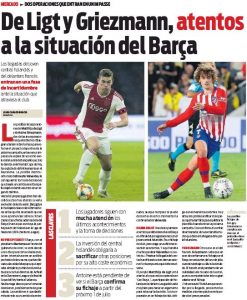 Should the Spanish champions still decide to make an approach for the defender, then they may have to sacrifice other signings in order to incorporate the Eredivisie star.

Another Catalan newspaper Mundo Deportivo also brings an update about the Dutchman and it does not come as positive news for Barcelona fans.

Barca had initially spoken to De Ligt and his agent Mino Raiola and they were close to sealing an agreement for the player.

However, he’s now cooled off his interest, as he and his representative are demanding better proposal and assurances of being a regular starter.

At the Camp Nou, they believe if they end up paying more money to De Ligt now, it could cause imbalance to their salary structure and when he is 23, Raiola’s demands to extend the contract could be ‘stratospheric’.

Barcelona want the Ajax star to prioritise their sporting project over the economic details, but he is also attracting interest from United, Juventus and Paris Saint-Germain.

Raiola is listening to all these offers and is wanting a bidding war, something the Catalan club are not willing to enter. 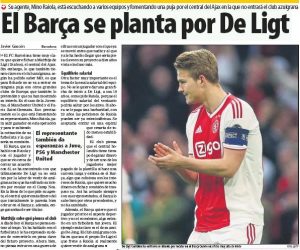