Matthijs de Ligt has long been on Barcelona’s radar and if earlier reports from Spain were to be believed, the Ajax captain was expected to make a switch to Camp Nou in the summer.

Over the last few days, Manchester United were dragged into the transfer race by the Catalan media, while the option of joining the Red Devils has been dismissed by the British press.

Journalist Oriol Domènech provides an update about the centre-back during Catalanya Radio program ‘Club de la Mitjanit’ and he stressed the 19-year-old was ‘crazy’ to join the La Liga winners and the negotiations to sign him are similar to those of Frenkie de Jong.

Domènech further goes on to state it’s ‘true’ the 20-time English champions are after the Netherlands international, but the deal is not done or ‘half done’.

Another Catalan radio station Rac1 journalist Gerardo Romero tweeted saying the Blaugrana are looking for an alternate target, who possesses a profile similar to that of De Ligt.

His agent Mino Raiola’s high demands and the better offers tabled by United and Bayern Munich have put the defender’s arrival at Camp Nou in trouble.

Tuesday’s edition of Sport states the teenager is viewed as a ‘strategic signing’ by the Spanish champions and want to convince him that a move to Barca is the ‘best option for the future’.

It’s clear that Barcelona will continue working on their efforts in signing the Dutchman, but without entering into a bidding war.

As reported by the same newspaper on Monday, it’s once again relayed that De Ligt is focusing on the UEFA Nations League with the Netherlands and a decision on his future will only be taken after that. 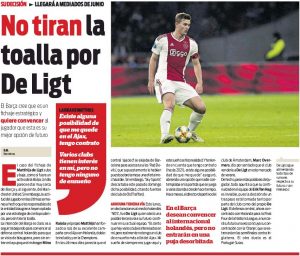 Neither of these different reports on De Ligt let us know whether he is close to joining Barcelona or not, while he continues to attract interest from United and other clubs.

With Raiola’s involvement, one could expect more twists and turns in the coming days as the saga continues to drag.