Home Europe Real Madrid accelerate in ‘past few hours’ to close signing of much...
SHARE

Teenage goalkeeper Andriy Lunin has kept 20 clean sheets in 51 games over the past two seasons for Zorya Luhansk. His form has seen him attract interest from Real Madrid, Liverpool, AS Roma and Real Sociedad.

Spanish newspaper Marca claims the Champions League winners have “won the services” of the 19-year-old after managing to beat competition from other European clubs. Lunin has been on Real Madrid’s radar for a long time and they have been closely monitoring him for a while.

The report claims the 13-time European champions have “accelerated the operation” in the past few hours. The La Liga giants have closed the deal for €8.5m plus €4m in variables.

Lunin will become the latest young talent to join Real Madrid Castilla, but Julen Lopetegui will have a final say on where he will play next season.

Lunin can continue his development at Real Madrid Castilla or train with the first team, which will see him become the third choice goalkeeper. The other option for him is to join another European club on loan in order to get more first team opportunities. 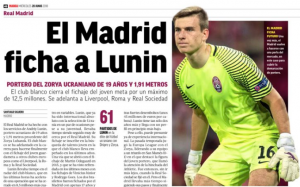 sign Alisson Becker from AS Roma. The 25-year-old  is expected to compete with Keylor Navas for a place in the starting lineup.

The European champions are still negotiating with the Serie A outfit for the Brazil international, and the two clubs are yet to reach an agreement over fee.