Ramiro Funes Mori is in talks to join Mexican club Monterrey, in claims reported across the country on Friday.

The Everton defender’s twin brother Rogelio (pictured below) plays for the club as a striker, and it’s thought that’s a large reason behind Romero being interested in the move.

La Aficion, a newspaper local to Monterrey, have the most detail. They say Funes Mori is in negotiations to join the Liga MX side.

It’s described as a ‘South American bomb’ of a signing, and there’s some confidence a deal could be done. The Everton player knows all about the city via his brother, who has been with Monterrey since 2015.

Talks have been initiated at club level, and it’s claimed the response from Goodison Park was ‘positive’. Everton are willing to let the player go as long as Monterrey meet the asking price. That figure is put at $10m, which works out to be just over £10m, and the Mexicans would in principle be willing to pay that… but have worries over the player’s recovery from injury. 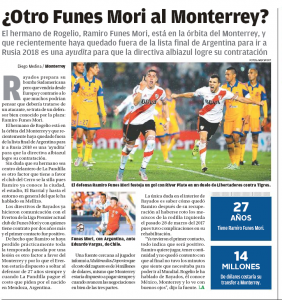 A source close to the situation is quoted as saying: “They already had the first contact, everything indicates that it will be positive. Ramiro wants to play, to have continuity and he was not happy that in the end he didn’t have the minutes he feels he needed to go to the World Cup. Rogelio has talked about Rayados (the club’s nickname), he knows Mexico, Monterrey and he sees it with good eyes.”

In April, Funes Mori told Argentine newspaper Ole: “I asked the coach to play me because I’m playing for a place to go to the World Cup. I’m fine and I hope I can play these games. I spoke with Rooney to tell the coach to put me on, he’s the captain and I told him so. He told me he was going to pass it on. I will do everything possible to go.”

Mexican football is a big deal, Monterrey get an average attendance of around 45,000 and the country’s biggest clubs can pay wages to attract players from Europe. Funes Mori would likely have to go through an extended medical to prove he’s fully recovered from his knee injury.