Home Europe From Portugal: Updates on Watford’s chase for midfielder, Hornets not the first...
SHARE

As Watford continue to be linked to Rennes midfielder James Léa Siliki, the Portuguese press comes up with an update on the situation today.

Newspaper A Bola reports that Porto are also interested in the player, and have been negotiating the transfer with the French side.

The outlet claims Porto’s last bid was €8m. But that’s still far from what Rennes want, since they’ve rejected the bid and demanded €15m.

Even though the difference is big, A Bola doesn’t rule the transfer out, saying Porto could still find a deal in case they give Rennes a percentage of a future move. 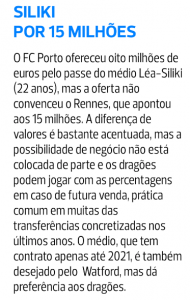 Regarding Watford, what A Bola has to say is that Siliki would prefer a move to Porto instead of joining the Vicarage Road side.

Players have been preferring English clubs over Portuguese sides for years, with some of them even choosing to play the Championship instead of Liga NOS. Perhaps what would favour the Dragons is the opportunity to feature in the Champions League next season.

But if the Hornets have the €15m available, maybe the story could have another ending.