Tottenham Hotspur have placed a €45m bid for the Benfica midfielder Gedson Fernandes, according to Portuguese newspaper Correio da Manhã.

Spurs are said to be ‘delighted’ with the 20-year-old, who has been impressing in his first season as a professional for the Eagles.

But it turns out that the Benfica president Luís Felipe Vieira has turned down the offer, claiming that it’s not enough to take one of their youngsters.

Correio da Manhã says Vieira is focused on not selling the young talents for much less than the release clause, and Fernandes is only leaving in case of an offer too good to turn down. 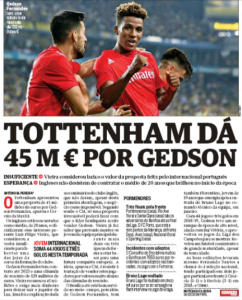 But even with the negative answer, Tottenham emissaries ‘didn’t take the deal as impossible’, and are not giving up on the signing so easily.

Since Gedson Fernandes is protected by a €120m release clause, there’s still a wide margin for Tottenham to try to convince Benfica to sell the young midfielder.

Despite starting the season as just another player promoted from the academy, Fernandes has impressed in the first few months, and even convinced manager Fernando Santos to take him to the national team. Now even though he ended up losing his starting spot at the Eagles, his potential is still taken very seriously by the club.