As Manchester United’s scouting mission in Portugal never ends, here’s a game that emissaries from the Red Devils had an eye on this weekend.

According to newspaper A Bola, the Old Trafford side had officials at the league clash between Paços de Ferreira and Porto, which ended with a 4-2 win for the away side.

As we already know, Manchester United don’t need a specific target to convince them to scout a game in Portugal. So even though the Red Devils are not linked to any players from those clubs, it’s no surprise that the report doesn’t say who they were watching either.

Porto’s strength to score four away goals to secure this victory only shows how good they’ve been this season, and with their win, they’re six points clear on top of the league table. 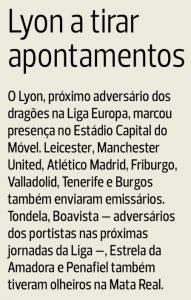 The Dragons’ man of the match was Vitinha, who’s having a great time in Portugal since his return from Wolverhampton Wanderers. Newspaper O Jogo says there was a ‘monstrous exhibition from the genius’, who controlled all of their offensive actions in midfield.

Another player who may have drawn Manchester United’s attention was Mehdi Taremi, who got the same rating from local newspapers as Vitinha, having scored one goal and assisting two.

The match also had the visit of scouts from Leicester City, Atletico Madrid, Freiburg, Real Valladolid, Tenerife and Club Brugge.